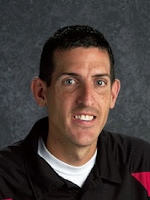 Matt Chance has been at the helm of the Bowling Green Cross Country program for 22 years.  During his time as Bobcat Head CC Coach he has led the boys to 21 EMO Conference Championships and 14 district championships, winning 11 straight district titles from 2000-2012.  He has led the girls to 17 EMO Conference Championships and 8 district championships.  Coach Chance has helped lead the Bobcat Boys Cross Country to 5 state trophies and LadyCats program to 5 State Trophies. Chance has been voted Class 2 State Cross Country Coach of the year three times (2004,2010,2011) by the Missouri Track and Cross Country Coaches Association and was voted NFHS Sectional Coach of the Year in 2010.  He was awarded the MSHSAA 2020 Boys Track & Field Coach of the Year also. 2009 marked the highlight of Coach Chances’ coaching career when the boys finished off an undefeated season by winning the Class 2 Boys State Championship.

Chance is a native of Lovilia, Iowa.  He graduated from Albia High School in Albia, Iowa where he participated in cross country, basketball, track, and baseball in high school.  He attended Fort Scott Community College in Fort Scott, KS from 1992-93 where he participated in Track and Cross Country.  Chance then transferred to Simpson College in Indianola, Iowa where he competed at the NCAA Division 3 level in Track and Cross Country.  While at Simpon College, he was a national qualifier in cross country (1996)  and a two time NCAA All American at 5,000 meters  in Track & Field during the 1995 and 1996 seasons. He was voted into the Simpson College Hall of Fame for Track & Cross Country in 2016.   Chance resides in Curryville, MO with his wife (Kim) and two sons Brock and Ben.